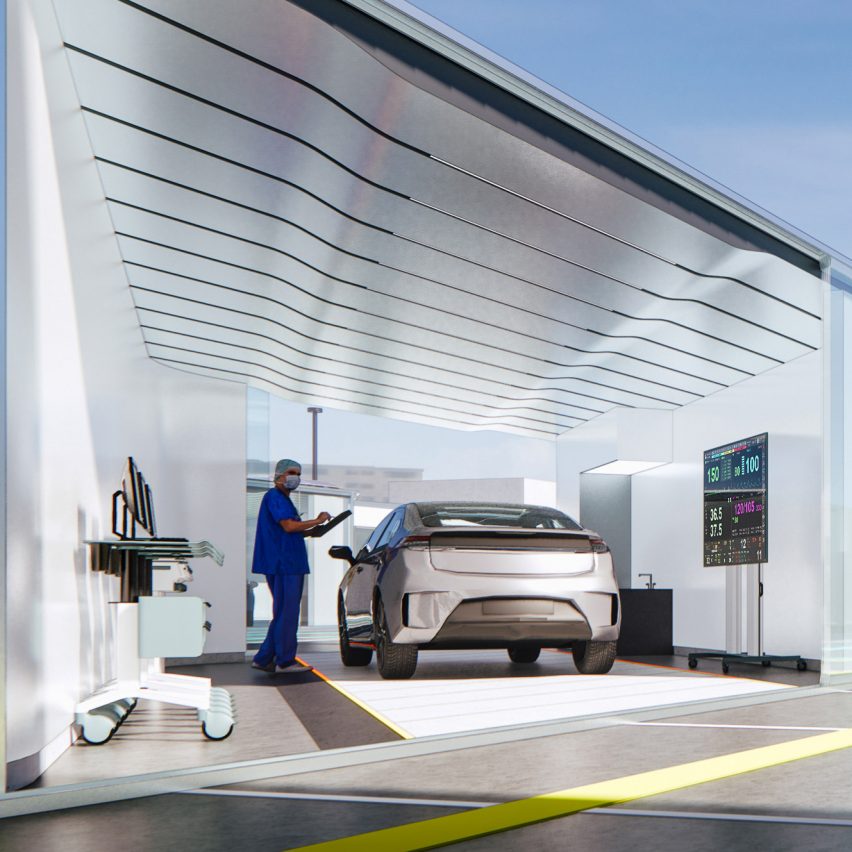 Hospital patients could be treated in prefabricated drive-through clinics without leaving their cars, according to a concept by architect NBBJ.

The clinics could also be used to administer coronavirus vaccinations, according to the architects.

The prefabricated units “could be especially effective for accelerated vaccine roll-out, as it enables simultaneous distribution to every passenger in the car,” said NBBJ partner Ryan Hullinger.

The proposal, drawn up in response to the coronavirus pandemic, would see patients drive into special bays outside hospitals or in hospital parking garages.

There, they would interface with healthcare staff through an open car window or door.

“Covid has pushed us to think about breaking out of the boundaries of a traditional healthcare space and actually providing primary care in a totally unorthodox space like a car,” said Hullinger.

Patients with non-urgent conditions could be treated by medical staff in the bays without leaving their vehicles.

Hullinger explained the concept during a live Dezeen talk about wellbeing and healthcare, presented by bathroom and kitchen products brand Kohler.

NBBJ developed the concept earlier this year after noticing that the Covid-19 pandemic was changing the way patients visited hospitals, often waiting outside in their cars rather than entering the building and using waiting rooms.

“It was driven by demand for convenience and demand for safety,” said Hullinger, who is based at international architecture firm NBBJ‘s office in Columbus, Ohio.

“Both of these things have been around for a long time. Healthcare has been happening in the space of a car for quite a while now in pharmacy drive-throughs but [the need for] safety has acutely curved up in the last nine months.”

“There’s a sweet spot here,” he added. “In-car care needs to be explored.”

Unlike a traditional drive-through facility such as a restaurant or pharmacy, where cars queue up and orders are taken through a window, the In Car Care concept would be akin to a motor-racing pitstop, with services brought to the car once it is stationary.

“The beauty of the service bay [approach] is that it’s nonlinear,” said Hullinger. “So instead of the drive-through, where you have serial processing, you get parallel processing.”

“And you get better human interface because you’re not reaching through an architectural window to interact with the patient. You’re standing right next to the patient through a roll-down window or an open door.”

The prefabricated bays would feature sliding screens for privacy and large monitors on wheels so that patients can see test results and health data.

Set at an angle to the service road to allow easier access, the diamond-shaped bays fit within the 60-foot (18-metre) grid of a standard parking lot. Each is 600 square feet (56 square metres) in volume.

However, the bays would be designed to reassure patients that they are entering a safe and friendly environment.

“The look and feel of that space is also extremely important to us,” Hullinger explained. “We want to make sure that people who are pulling into this space don’t have any confusion with pulling into anything that feels automotive or unclean.”

The units would have psychological benefits too since people feel safe in their cars, whereas entering a hospital can make people feel anxious.

The Covid-19 pandemic has led to a huge increase in the use of telehealth services, potentially leading to a long-term decline in visits to hospitals.

This in turn could free up space in hospital parking garages, making NBBJ’s drive-in bays a viable alternative for people who don’t have access to telehealth services or who prefer a physical meeting with caregivers.

Drive-in healthcare facilities could be set up anywhere they are needed, Hullinger said.

“We’re beginning to think about this idea of potentially putting them in underutilised malls in cities where you have arterial freeway access,” he said.

Another proposal for rapid coronavirus vaccinations was unveiled by UK architect Waugh Thistleton earlier this year.

Their concept involves building thousands of mobile vaccination clinics in shipping containers, which they claim could be used to vaccinate the entire UK population in 16 weeks.