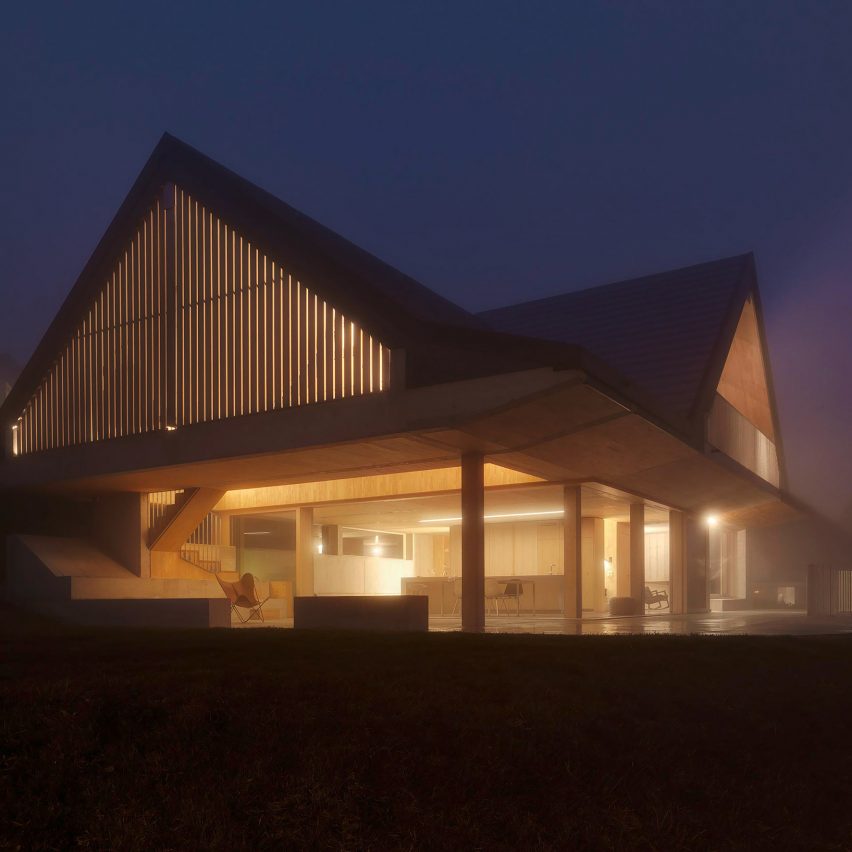 A large overhanging roof stands above this house that Gus Wüstemann Architects designed in the village of Buchberg, Switzerland.

Wüstemann adapted the form and materiality of the local gabled farm buildings that surround the Swiss village, near Zurich, to create a four-bedroom home that has a concrete frame and a wooden roof.

“We transformed the traditional wooden structure of a barn into a skeleton of concrete with a wooden roof, giving wider dimensions with less structural height,” explained Gus Wüstemann, founder of Gus Wüstemann Architects.

A spacious, open-plan kitchen and dining room, which is sheltered under the large gabled roof, occupies almost the entirety of the ground floor.

A series of retractable glass panels can be moved to open up the space to create what the architect describes as a pavilion-like feel.

“The concept was to have a gable roof covering an open ground floor of which half of it is outside space, like a barn, so in the summer the living area doubles,” Wüstemann told Dezeen.

“When all the wooden sliding windows are open, it feels as there is only a roof, like a pavilion.”

Separated from the open-plan kitchen by a staircase is a smaller living room that has a built-in concrete fireplace and window seat.

These stairs lead down to the basement, which contains a garage and study, and up to the four bedrooms that are contained within the roof space.

Throughout the project, Gus Wüstemann Architects limited the finishes to a combination of raw concrete and timber.

According to the studio, these materials help to give the building a more barn-like aesthetic and reduce the feeling of domesticity.

“The rawness and pragmatism of just having the two materials wood and concrete refers to a simple, almost industrial aesthetic of a barn. It’s a reference to craftsmanship, how is it made,” explained Wüsteman.

Although the majority of the ground floor is concrete, Wüsteman doesn’t believe that this gives the house a cold feeling.

“I never felt a combination of concrete and wood could be cold,” he said. “Obviously people react differently and sometimes we have prejudices because of things we were told.”

“The photos were taken on a foggy day in the fall – maybe the picture of the house taken from the street could give that impression, concrete and fog – melancholic,” he continued.

Wüstemann founded his Zurich-based studio in 1997 and has completed numerous projects in the city. These include an affordable apartment block almost entirely from concrete, dividing a 19th-century building into nine flats and using raw concrete to create a home and poolhouse overlooking Lake Zurich.

Photography is by Bruno Helbling.